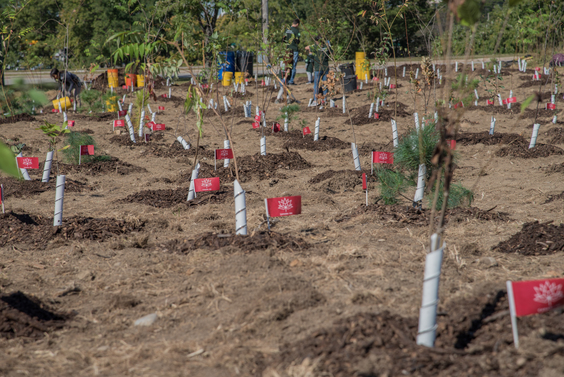 November is a time to honour every Canadian who has served our country. It's a time to give tribute to our courageous veterans, and to the men and women who continue to serve in Canada's Armed Forces.

In 2015, Highway of Heroes Living Tribute implemented a large-scale planting program to honour Canadian soldiers. The goal of the program is to work with volunteers and community organizations to plant 2 million trees – one "service tree" for every Canadian who has served our country. Of those trees, 117,000 "hero trees" are being planted to recognize those who sacrificed their lives in war since Confederation. These hero trees help honour their memories and serve as living, breathing memorials in our country's landscape.

This year, TD Friends of the Environment Foundation (TD FEF) provided a grant to Highway of Heroes Living Tribute as part of the TD Common Ground Project in recognition of Canada's 150th year. This grant helped facilitate the planting of over 3,000 service trees in cities like Whitby, Clarington and Trenton where over 2,000 volunteers participated. Two of the plantings were part of TD Tree Days and took place in Downsview Park in Toronto. Over 100 volunteers of all ages came out to plant 500 trees and learned about the Highway of Heroes Living Tribute program. Plans are also underway to prepare eight sites along the highway that will be home to 3,000 hero trees in the spring of 2018.The highway where the hero trees are being planted is a 170-kilometre stretch of Ontario's Macdonald-Cartier Freeway, commonly known as the 401. It is the route for funeral convoys that carry fallen service men and women from Canadian Forces Base Trenton to Toronto. To date, almost 8,000 hero trees have been planted by Highway of Heroes Living Tribute, while nearly 9,000 service trees have been planted in various communities along the Highway of Heroes thanks to volunteers and community events.

TD Tree Days is a program of TD FEF and since its launch in 2010; over 300,000 trees and shrubs have been planted with the help of volunteers across the country.